Magic: The Gathering’s Ice Age was released in 1995 as an expansion set. The 383 card set was the game’s most anticipated expansion deck and was generally well-received by players.

One of the reasons for the popularity of Ice Age is that it was designed to be played as a stand-alone game as well as a traditional expansion set. The Ice Age deck, like its predecessors, offers plenty of back-story details for players to learn. Ice Age continues with the story of Terisiare, a setting introduced in the Antiquities set. A thousand years after an explosion at Argoth that ended the Brothers’ War has left the land gripped in perpetual deep freeze. With these calamities, the civilization known as Dominica has largely crumbled, with barbarians, brigands, and marauders grasping for the scarce resources that remain.

The Ice Age story line is completed by three sets of cards beginning with Ice Age, continues with Alliances, and wraps up with Coldsnap. These cards introduce new mechanics into Magic: The Gathering, including new Lands. These snow-covered Land cards affect game play. There is also something called Cantrips, cards that can be used to cast spells and can be replaced by drawing another card. One of the most sought after cards in any of the decks is the necropotence cards. This black card allows players to trade life for cards. The single most popular card was Jester’s Cap. 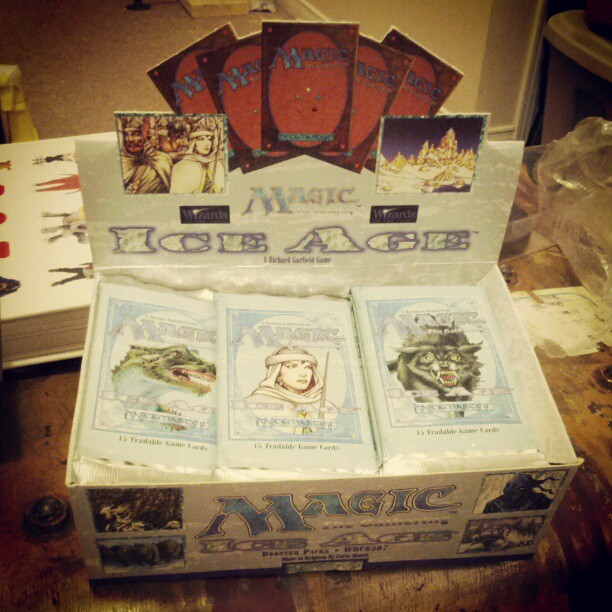 Magic: The Gathering is known for its intricate story lines and detailed back-stories and character profiles. Ice Age is no exception and the mechanics mentioned above are designed to enhance play, but they also introduce an additional level of detail that can be a little distracting. They don’t add enough to the game to outweigh the additional rules, which end up feeling unnecessary. Complex rules usually add to Magic’s appeal, but the following FAQ is an example of the rules skirting over the line into needless minutiae that adds little to the game. The most unique power of this card is that it allows its holder to look at the cards of his opponents.

Icicles and Other Odds and Ends Collectors will want to take note that there are four famous cards: Stormbind, Zuran Orb, Necropotence and Polar Kraken. The other aspect of Ice Age of interest to collectors is the fact that it is a stand-alone set, but its cards can also be used with the existing core sets. As a stand-alone game, some players consider Ice Age to be a more completely realized game and superior to the original core sets of Magic: The Gathering.

Earl Preston is a freelance writer based in Miami, Florida. Earl suggests that MTG collectors who are seeking to build and develop their collection view the selection of Card Kingdom Magic the gathering cards.