After i posted about Rosie Multitouch Coffee Table, i then learnt about an other similar technology which is called as Tangent – A MultiTouch Surface, which was being developed since several years 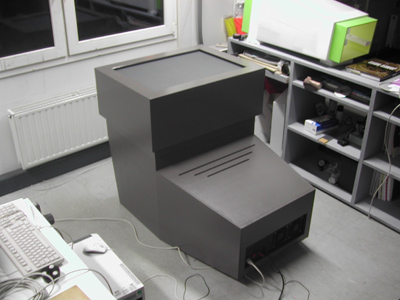 Tangent is built on the multi-touch research platform and used as a digital medium for research,testing and developing innovative and new multitouch interaction techniques. Tangent offers a direct interface to manipulate virtual objects by making it possible to touch and interact with these objects. Tangent asks for fundamentally different interaction principles than the ones known from traditional interfaces, similar to microsoft surface. In the project phase Tangent was developed and built and a range (set) of interaction principles were designed and implemented. 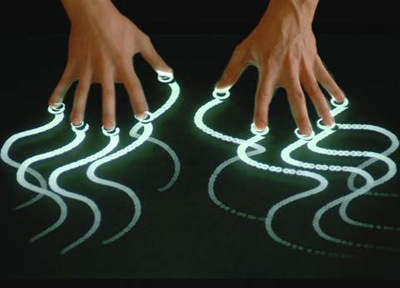 Hardware: It uses a tabletop multi-touch surface consisting of a rear projection and an infrared light based computer vision system. The tracking software provides the positions of all touching fingers but cannot identify which of the individual user’s fingers or hands is touching the surface. The screen has a resolution of 1024 by 768 pixels and a size of 68 by 48 cm. Therefore, a pixel corresponds to 0.6 mm.


Software: The Tangent uses VVVV of Meso for the video-tracking. VVVV is helpful in determing actual coordinates of each finger touching the screen. Open Sound Control, Java and OPENGL are programmed for Graphical user interface and the interaction techniques. 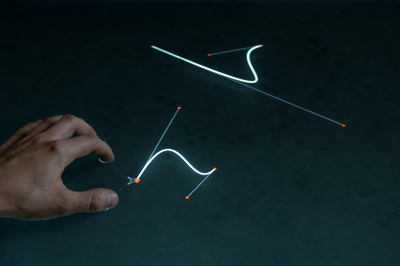 The Digital Tweezers – A Precise Selection Technique for Multi-Touch Screens: Since the size of the human finger makes it impossible for the computer user to precisely manipulate small elements on multitouch screens, a virtual tool called “Digital Tweezers” (patent pending), which helps users point, select and drag interactive elements just a few pixels in size was developed. This tool consists of a cursor with a fixed offset controlled by the thumb and index finger of one hand. To “click” an element, the middle finger is used to trigger a button. Using a cursor offset the tool enables a hovering state on multitouch screens. The “Digital Tweezers” combines all the advantages of other tools addressing the same problem and it doesn’t suffer from their disadvantages identified in recent works.