No business IT specialist who treats their job seriously would hand a computer to an employee without locking it down first. It would come with a login enabled, antivirus software and firewalls installed, any company exclusive security and more. All of this protects the user’s data from outside intrusion or access by unauthorized personnel. All of this is standard for any laptop or desktop computer issued to an employee.

What about smartphones? Many companies allow their employees to use their iPhones or android devices for work, and some even issue the devices themselves. As these phones grow more popular, they become enticing targets for enterprising hackers and virus creators. It’s no surprise when employees can use these phones to read e-mail attachments, VPN into the company network and more. Shouldn’t IT specialists install antivirus software on these phones as well? Software like Kaspersky is the norm for computers, why not for phones?

Whether or not this is a good idea depends on the knowledge of how a smartphone differs from a traditional computer. Normal computers are wide open machines. Any application can view unused RAM, hard drive files and application data. Using unsecured software or downloading a virus accidentally can put all that data up for view. Only a system intentionally locked down with encrypted data can withstand these attacks. Even then, new attacks are created every day, so security is a constant rush to keep up. 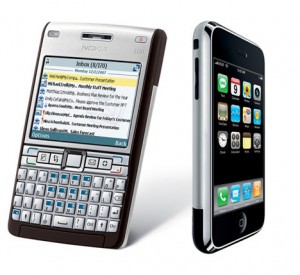 For smartphone’s, each individual program that runs does so in it’s own work environment. It is effectively isolated from other applications and data. Even if a malicious program was installed, it wouldn’t be able to see much. On top of that, smartphones have the added layer of security that comes from the app store. Apps downloaded from the official source tend to be much less likely to be infected.

Unfortunately, the same limits that apply to malicious apps also apply to virus scanners. These apps don’t have free access to the phone. Instead, to scan a file it has to be sent to the virus scanning app. Some apps do work on a wider range, especially for android devices, but the phone has to be rooted first. So while the viruses are not yet very sophisticated, neither is the antivirus software available. Viruses for phones so far have only done simple things like harvest contact information and send off unwanted text messages.

Smartphone security these days takes a different track. Lock screens requiring a passcode to access the phone are the norm. Apps that erase or blank the phone if the passcode is incorrect too many times, or allow the user to blank the phone remotely, are the go-to preventative security method.

As for when a smartphone connects to a company VPN, security software is being developed to check if the phone is secure enough and block access if it’s not. IT specialists can limit the data smartphones are able to see on the company network.

All of this works much better than smartphone antivirus software, which does little and eats up battery life. It’s better to use the existing security resources available on any smartphone, and practice safe computing habits to avoid taking risks. While there’s no doubt security will always be an issue, the standard antivirus model is not the solution.