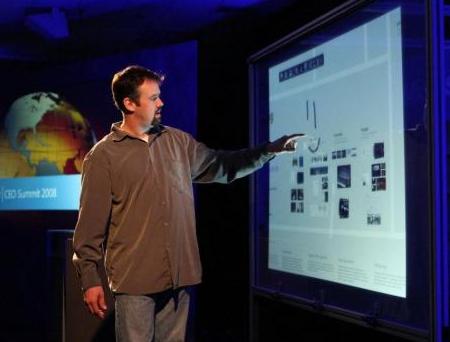 It seems to be an era of touch technology, where fingers can do wonders on a screen than merely pressing them on a boring keyboard. And it is none other than Microsoft who plays the pioneering role in continuously regenerating their touch screen technology – from tabletop Surface computers to the all new Microsoft TouchWall.

If one remembers correctly, it was not so long ago when the then Microsoft chief had announced the launching of the Surface technology to the much amazement of the technology freaks around the world. The tabletop Surface computer was first of its kind of technology, which took user interactivity to new heights with the appropriate convergence of the virtual world with real life experiences.

There has been quite a debate over the tactile interfaces, used in Surface tabletop computers. While there was an earlier announcement about the upcoming Windows 7 to feature all the interfaces; Apple Inc. can very well be lauded for have created the most thriving tactile computer till date , i.e. the iPhone. iPhones are one of the very first successful interpretation and integration of touch technology or Multitouch which allows file browsing, web surfing, zooming, and rotating pictures, with just the movement of your fingers.

In Bill Gates words, TouchWall is “intelligent whiteboard”. This device operates almost similarly to the iPhone – pinch to zooming and swoosh fingers for movement. To the amusement of all the delegates at the Summit, Gates displayed the easy navigation around a complex word document filled with multimedia, with the help of the interface.

The TouchWall allows you to flip through pages of a Word document, showing off various touch effects; while a PowerPoint document can be presented with astounding flair with moving around and zooming-in on select features. However, the most fascinating part of TouchWall is the pen feature, which allows you to circle items, or jot notes, all with your finger.

The gathering was impressed with the easy user interactivity of the interface; and it did not take the Microsoft CEO to categorically, raise his hopes for the TouchWall to become a vital tool for use with Microsoft Office’s next iteration.