Multitouch technology seems to be conquering the imagination of technology giants the world over, as more and more of them join the bandwagon to develop new interfaces every other day. A technology that has taken the world by storm since Apple first introduced it in their iPhones and iPods. Now, Multitouch Interface is all set to take over an era where mouse and keyboard pads will become outdated.

The most intriguing part of Multitouch Interface is its ability to be largely versatile. MultiTouch technology, initiated with mere touch-screens widely used in money vending machine and airport kiosks. However, Apple made the first successful implementation in hi-tech applications such as in iPhones and iPods.

Even though Apple is not the inventor of the technology, however the popularity of Multitouch Interface has become synonymous to Apple. Apple by the way is cashing in on the concept of Multitouch, incorporating its own ideas and popularizing it. Not to forget, the same crucial role of Apple in popularizing the mouse and the graphical user interface (invented elsewhere) in the 1980s.
However, what is the craze for Multitouch Interface all about? Is it the excitement of interactivity on the screen; or the user’s ability to get an illusion of symbolic control over the machine that is fascinates. The touch technology enables a user to use his or her fingers to maneuver virtual objects on a screen as if they were real, creating an illusion of reality.

Besides that, Multitouch Interface is far more sensitive than touch screens. In a Multitouch device, you are capable of differentiating between the press of a single finger and the press of multiple fingers. Moreover, it also enables you as a user to interpret the movements or gestures you make. This has been possible due to the technical settings of different actions in the Multitouch device, recollected depending on the number of fingers they detect, and based on the gesture a user performs.
Apple, which takes the credit of best-known interface on it iPhones and iPod Touch devices using the Multitouch Interface, allows applications where you can rotate, flip, move and drag pictures, play songs and list emails with mere movement of your fingertips. Overwhelmed with its initial success, Apple has now integrated Multitouch Interface in its new laptopMacBook Air, which offers its users a much bigger screen to experience Multitouch other than the small iPhone screens. 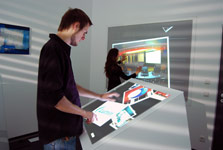 Not withstanding the competition, Lumin of Germany has introduced Lumin Multitouch, which offers a 42-inch display powered by a Mini Mac. This can work at a maximum resolution of 1024 x 768 and allows you to make your interaction with the virtual world much more real and exciting.
Another major player in touchpad technology Synaptics, which is a leading supplier of touchpads for laptop manufacturers, has announced the incorporation of Multitouch Interface into its touchpads. The new Synaptics touchpads will have the pinching effect for shrinking and enlarging pictures and a feature called ChiralMotion. This feature creates rapid scrolling motion by the movement of two fingers in a circle anywhere on the touchpad.
While Synaptics has integrated another feature, called Momentum, which lets you imitate a trackball by flicking a single finger across the touchpad. Multitouch Interface here is adept enough to recognize the gesture, and can move an object on screen, like a virtual bowling ball in a game, with the illusion of inertia.
Joining the elite group also is Taiwan’s cell phone manufacturing company HTC. It has announced creating a Touch Phone, which has integrated basic Multitouch Interface in itsMicrosoft’s Windows Mobile operating system.
Some other fascinating features of Multitouch Interface are that you just need two fingers to rotate photos and move the images on the screen as you desire. In addition, you can ‘zoom in’ and ‘zoom out’ a photo out on a Web page just by pinching the image with two fingers. Moreover, you can rapidly make forward and backward movement through a sequence of Web pages or photograph just by placing three fingers on the touchpad and moving them quickly to one side. 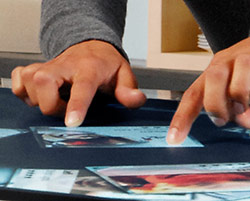 However, the biggest innovation after all is Microsoft Surface, which has integrated Multitouch Interface in Surface technology. This surface application based on a table computer called the Surface, is set to change the way people do businesses in casinos, restaurants, hotels and retail stores.
From choosing the kind of food and drink from the virtual menu to getting every details of the wine you ordered, to booking tickets to the vineyards from where the wine originated; Microsoft Surface has it all. It uses Multitouch Interface finger gestures to move around digital objects such as photos, play games and browse through product options. Moreover, Microsoft’s Surface lets users rearrange groups of digital photos. You can just drag them around on the tabletop as if they were actual paper prints.
Prior to launching MS Surface recently, it has integrated Multitouch Interface in its Tablet computers and Palm’s Treo cell phones to name a few. This was applicable in touch screens that employ stylus or fingers to move cursors, select icons and other items, and even to write on the screen.
There have also been reports of Hewlett-Packard having developed a prototype of a similar Multitouch Interface based table computer for home use. It will not be very long when people can use this Multitouch technology to create a more vibrant impact in this world, which can make applications in our daily life simpler.
Even though the success of Multitouch Interface is still to be accounted, it is sure to replace the mouse and graphical interface technology, other than the interface of menus and folders.
As different companies are set off to prove their mettle in developing the most viable application with Multitouch Interface, it is encouraging to witness the constant evolution in technology. The use of Multitouch Interface in severaldigital devices such as wireless portable data gadgets (iPhones and iPods) laptop computers, advanced cell phones, and other types of computing products is definitely a positive trend.